I ride around London on my bike and in my head I'm thinking, "Cycling, F*#k yeah!"

I'm better than other Londoners because most days (when my bike isn't being stolen or if its not snowing) I cycle everywhere I go. Unfortunately, the rest of London doesn't always agree. Yes Addison Lee, I'm talking about you...

For those of you who live under a rock, Critical Mass is a monthly event in London, where "there are probably as many aims as there are participants". For many of the people involved, it's about reclaiming the road and after a brush with one very aggressive driver who was using his car as a weapon on Newington Green a few weeks ago, I'm all for owning a bit of road. 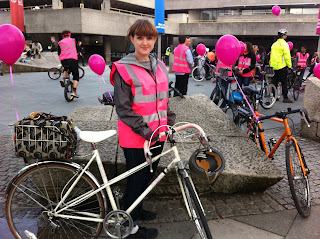 Last Friday was the 18th anniversary of Critical Mass London and I decided that it was about time that I went down to see what it was all about. I arrived at about 6pm to a mish-mash of wheels and feet under the Waterloo Bridge. As it was so close to the London Mayoral Elections, it had been hijacked by some cycling politicians but to be honest that was all part and parcel of the fun.

Just so you know, after the big protest from the war that Tony Blair led us nicely into a law was created stating that you could not organise a protest or the like without permission. As a result you'll find little information about Critical Mass or it's organisers online. If you go down there though, everyone is super friend. As it was the 18th anniversary there was cake and beer and biscuits being handed around along with pink balloons and party hats. It was all rather festive. 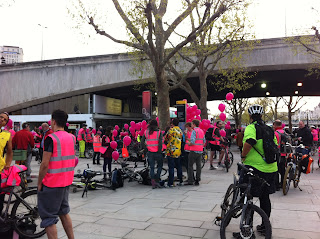 Just after 7pm we set off, what started out as less than a hundred, turned into what seemed to be thousands of cyclists, scooter-folk, skate boarders and more. What was most suprising is that so many of them were normal folk, and I certainly overheard conversations about working freelance and a few people moaning about Tesco value range. These were regular Londoners who had decided to reclaim the road and it was bloody fabulous. While cycling along, all the traffic stops for you and finally you feel some power.

I'd recommend this for any cyclist in London. Even if you don't cycle much, there were Boris bikes there along with the rest of us. You'll also meet other lovely people and it's totally free - what more could you ask for?

What? Critical Mass London
When? Every Last Friday of the Month, meet 6.15pm, ride begins 6.45pm
Where?  Meet under Waterloo Bridge, outside National Theatre on South Bank
Who? YOU
Pawed by SquirrelLizzie at 07:06